2019 is a COLOSSAL year in rugby with the Rugby World Cup taking place in Japan in September.

As the ULTIMATE preparation our Fiji Airways Flying Fijians will be defending their World Rugby Pacific Nations Cup title in a series of home and away matches both in Japan and here at the ANZ Stadium, Suva.

In an extended format, Fiji Rugby fans get to see not only the might of the Pacific with Tonga and Samoa but also regional heavyweights Japan, Canada and the USA all fighting for the right to hold the Pacific Nations Cup.

The tournament generally occurs every year in the June mid-year international test window. The tournament was played mainly throughout June, with the last round in early July. The revised tournament begins in May due to pre-existing Test commitments and concludes in late June.

The Pacific Nations Cup was funded as an International Rugby Board (IRB) tournament which was part of the $US50 million, three-year, global strategic investment programme launched in August 2005. The competition was aimed at developing the Pacific rim sides in the second tier of the rugby nations: Fiji, Japan, Samoa and Tonga. The Junior All Blacks were also invited to compete, who are New Zealand’s second XV. “The IRB Pacific 5 Nations is a tournament that will provide more certainty for Fiji, Japan, Samoa and Tonga in terms of regular high level Test match rugby, while also providing a high level of competition for the Junior All Blacks,” said Mark Egan, the IRB’s Head of Rugby Services.[1] 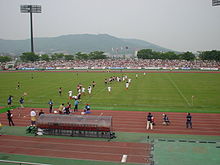 In the first year only it was called the IRB Pacific Five Nations and did not include Australia. Australia had been invited to take part in the inaugural 2006 tournament but decided against sending a team stating that they wanted to focus on their domestic competition. The inaugural tournament kicked-off 3 June 2006 and was played in a round-robin format, with some games being held in Australia. The Junior All Blacks won all of their matches en route to winning the 2006 tournament. The inaugural tournament was a success in providing a platform for Pacific nations and Japan in gaining valuable exposure.

Australia A joined an expanded competition for the 2007 season. The inclusion of Australia A meant that the tier 2 nations would have an even greater number of matches in the build up to the 2007 Rugby World Cup. For Australia, it provided a stepping stone for Wallaby selection. Following the 2008 tournament, however, the ARU announced Australia A would not play in 2009 due to the current economic environment.[2] Australia has not participated since then.

In January 2013, the IRB announced that both the USA and Canadian rugby teams will be joining the 2013 competition on a permanent basis. For the first time, the reigning champion Samoan team will not be competing as they will be taking part in a competition in South Africa.[4]

Teams competing in previous years, Canada, Japan and the United Stateswere not scheduled to participate in the tournament for 2017 or 2016 due the 2019 Rugby World Cup qualifying format. The top two teams on aggregate across the 2016 and 2017 Pacific Nations Cups for Japan 2019,[1] with the team finishing third scheduled to enter the repechage for qualification.[2]

Having not hosted a test match since playing Fiji in June 2009, Tonga was given the go-ahead to host a test match with World Rugby’s approval of the revamped Teufaiva Sport Stadium.[3]

Fiji retained their title to win for the third consecutive year in a row.